Prior to 1885, the City received its water from private wells. In 1885, Dr. J. R. Hall and Edward Page organized and established a public water supply system. The source of supply was shallow wells and a spring located near Sand Hollow Creek and Park Avenue. A steam pump station was built on this location.

This served the City until 1901. In 1901, a group of public spirited citizens charged that the existing water service had been inadequate to meet several emergencies, including a major fire that ocurred that year. They encouraged the City to purchase the Water Works Company so that sufficient water main extensions could be built immediately. This agitation resulted in the passage of a bond issue in 1903 for $40,000 to purchase the existing Water system. 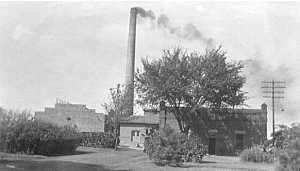 From 1903 to 1914, the City Water Works was operated and controlled by the City Council. On January 10, 1914, a non-partisan Board of Public Works was created by an Ordinance passed by the Council. This Board still governs the operation of the City's water company. The first board members were L. M. Steele, President; Charles Petry; W. F. Fisher, Vice President; Henry Lowenstein; and C. D. Alexander, Secretary. They appointed V. J. Bedell as Water Superintendent and City Engineer for a period of 3 months at $125 per month plus $18 for horse hire. The water bills usually averaged between 50 cents and a dollar.

The net cash profits for 1914 were $4,335.04. There were 15 miles of water mains and 141 fire hydrants. By 1915 there were 930 consumers using 69,103,870 gallons of water. In 1925 Marshall had 175 fire hydrants which was reported to be about twice as many as other Missouri cities of comparable size. Water was also furnished that year for 2 drinking fountains, 53 sewer flush tanks, washing streets, and 1 horse trough. Several blocks of water mains were added in each of the early years.

The Malta Bend plant was constructed in 1946 with 3 wells. Robert Hayob and Earl Senter were the plant's first operators. Robert Hayob went on to serve as the Water Superintendent until his retirement in 1988. His father, Henry, served in the same capacity from 1925 to 1954. Two more wells were drilled in 1954 to accommodate the increased demand of water usage. In 1963 two more wells and a 20" diameter concrete flow line were added.

In addition to the Malta Bend Treatment Plant, two pumping stations located at Miami Street and North Street serve the City of Marshall. Three more wells were drilled in 1976 bringing a total of 10 wells into operation. These 10 wells are still serving Marshall's population today. A new water tower was built in 1981 with a 500,000-gallon capacity.

The $40,000 investment made in 1903 for a municipally owned water company now produces a yearly gross water sales of over $1,600,000 an achievement made possible for the citizens of Marshall through the foresight of the City Council and Board of Public Works who have continued to operate with "Liberty, Independence, Freedom and Home Rule."